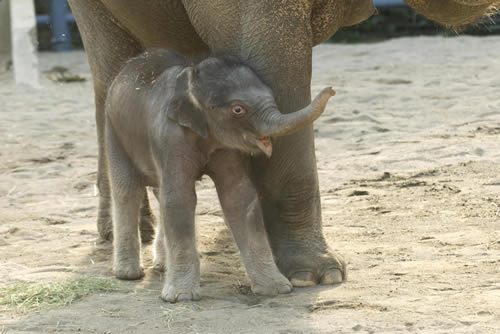 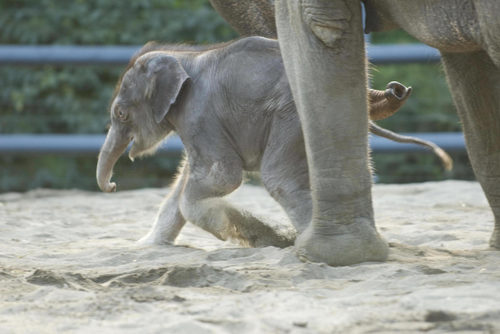 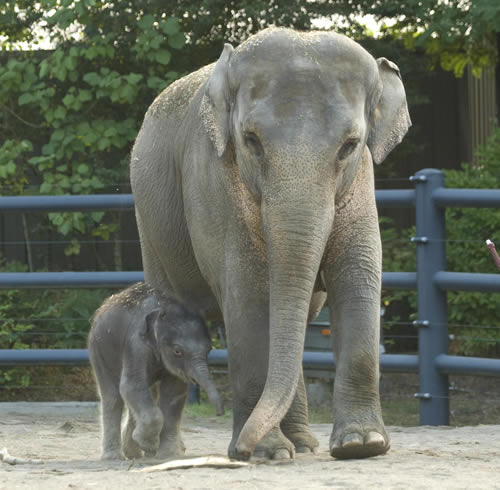 Keepers, increasingly confident that first-time mom Rose-Tu is bonding with the new calf following her initial aggressive behavior Saturday, removed the last of the elephant's leg restraints at 7 a.m. today. Fifteen minutes later they unharnessed Rose-Tu's calf, who has remained close to mom since then, nursing and trotting to keep up with her big steps, as she roams about the front viewing room of the elephant barn.

Keepers had removed two of Rose-Tu's restraints yesterday around 6 p.m., and one more at around 1:30 a.m., as she seemed to grow calmer and more at ease with the calf. Veterinary staff will continue to supervise Rose-Tu and her calf during their bonding process.

"We're taking it slow to ensure that mom and calf are completely bonded and comfortable," said Mike Keele, the zoo's deputy director and the Association of Zoos and Aquariums' species survival plan coordinator for Asian elephants. "Once we're confident in the strength of the mother-calf bond, we'll work on introductions with the other females in the herd, Shine and Chendra."

Keele said the calf was "getting wobbly on his feet" yesterday, because he hadn't been getting a lot of sleep, but today he seems much more rested. The calf lay down and slept once at 4:45 a.m. for an hour. And yesterday, the calf slept underneath his mom for an hour and a half.

"The calf has lost weight, which is what we expected," Keele said. As of 6:45 a.m., he weighed 281.6 pounds - less than when he was born - but he is expected to be back to his birth weight by today or tomorrow. "This morning he's doing more running than nursing, as he trots behind Rose-Tu," added Keele.

The baby was born at the Oregon Zoo at 3:56 p.m. on Aug. 23. Zoo officials are still uncertain about when the public will be able see the calf.

"From the behavioral signs we've seen thus far, we're very hopeful that the reintroduction will be successful," Keele said.

Keele believes that because Rose-Tu had never seen a birth before, she became confused when the baby was born.

Rose-Tu, born Aug. 31, 1994, was the most recent elephant born at the zoo. Rose-Tu is a popular elephant within the herd and with her keepers. She is always looking to tease her herd mates and shares a strong friendship with Chendra, who is nearly the same age. Rose-Tu is the second smallest elephant in the herd, weighing about 7,600 pounds. She conceived in late 2006.

The Oregon Zoo has a renowned breeding program for endangered Asian elephants. More than 25 elephants have been born at the zoo, beginning with Packy in 1962.

As the infant grows older, father Tusko - a 13,500-pound, 36-year-old Asian elephant - will be introduced and allowed to interact with him, as well. Tusko arrived at the zoo in June 2005 on a breeding loan. He has successfully sired three calves in the past -- two while living in Canada and one in California.

The Association of Zoos and Aquariums' Species Survival Plan for Asian elephants recommended that Rose-Tu be bred with Tusko. The AZA, of which the Oregon Zoo is an accredited member, strives to maintain a sustainable population of the endangered elephants in North America. Currently, birth rates are lower than necessary to do so. With few bulls and low birth rates -- combined with an aging female population -- the North American elephant population is at of risk becoming extinct.

In the late 1990s, scientists warned zoos that unless a reproductive management program was undertaken, North America was in danger of not sustaining a viable elephant population. Statistics indicate that if females do not become pregnant by the age of 25, their ability to reproduce is severely diminished.

An endangered species, Asian elephants are represented by an estimated 38,000 to 51,000 individuals living in fragmented populations in the wild. Agriculture, deforestation and conflict with humans pose a constant threat to wild Asian elephants.