Last week we brought you the story of Shanti, the new snow leopard kitten at the Binder Park Zoo. This week the Binder Park Zoo tells us that Shanti has some new friends: two playful puppies named Lillie and Bhadra. These playpals are helping Shanti socialize in the absence of other kittens. So far the three have been getting along great! 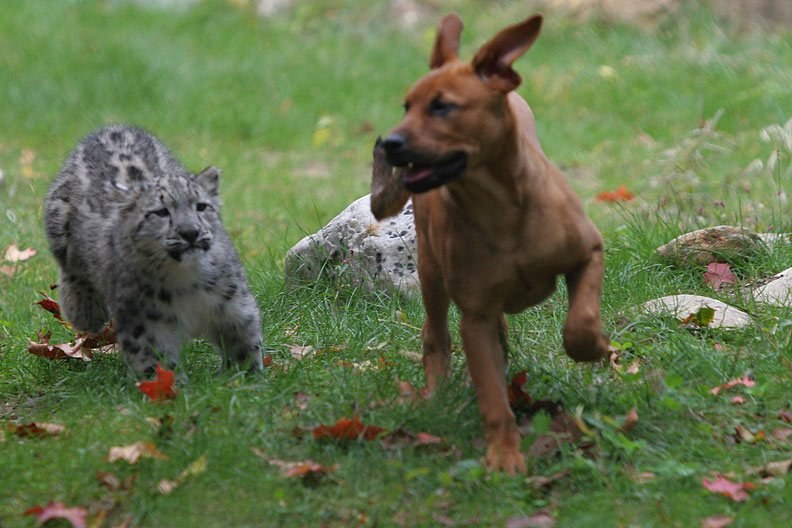 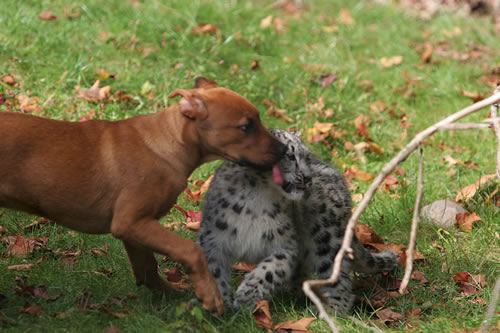 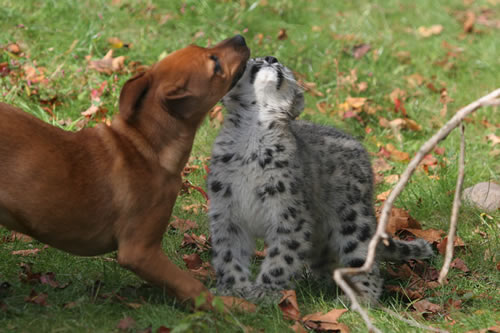 Binder Park Zoo’s baby snow leopard cub, now 7 weeks old, has received some playmates. As a means to provide companionship and socialization for Shanti, she will be spending her time with two 9 week old, very charismatic and playful pups named Lillie and Bhadra. The trio is getting along well and enjoying their playtime.

Shanti is being raised with the pups because at birth she was removed from her mother so she would stand a better chance of survival. Her mother, 11 year old Lotus, wasn’t demonstrating natural mothering instincts imperative for Shanti’s survival. Minimizing human contact is important and the puppies are helping. “We feel it’s very important to limit the amount of human contact that the cub receives to decrease her chances of imprinting on us,” said Jenny Barnett, Director of Wildlife Conservation at Binder Park Zoo. “Our purpose in having snow leopards at the Zoo is to educate our guests about conservation of this species but also to breed and maintain a genetically diverse group of animals that retain as many of their wild traits and instincts as possible. The possibility of future release back into the wild is unlikely but something we do not want to rule out. An animal that grows up to depend on humans can never be reintroduced back into the wild.”

The puppies have been adopted through Educated Animal Rescue and Teen Haven, a local animal rescue organization dedicated to the welfare of people and animals. They will remain with Shanti for the duration of her adolescence and will provide the companionship and warmth she would have received from her mother. This is an ideal pairing for Shanti and one that has become common practice throughout the zoo industry.

Due to the many threats that snow leopards face there are only 3,500 to 7,000 still left in the wild and 600 to 700 snow leopards held in captivity. Some of these threats include poaching, loss of prey and habitat, and the lack of protection, awareness and support. The snow leopard inhabits one of the harshest environments on earth – the mountainous regions of central Asia. The snow leopard is currently fighting for its existence in China, Mongolia, Nepal, India, Afghanistan, Russia, Tajikistan and Pakistan. Currently China has the largest number with approximately 2,000 snow leopards.

There are a number of efforts underway to help save the snow leopard in which Binder Park Zoo participates including the International Snow Leopard Trust (ISLT) and the Association of Zoos and Aquariums (AZA) Species Survival Plan (SSP). The AZA has taken action by bringing the plight of this animal to public attention though the work of the Snow Leopard SSP. The SSP works to keep a large, genetically viable, healthy group of snow leopards in zoos and preserves throughout the United States and the world.

If snow leopards become extinct in the wild, the hope is that one day captive-bred animals may be able to return to the wild if suitable habitat is ever restored. The SSP also works to preserve native habitats and educate local peoples about the snow leopard and have them take a lead role in the conservation effort.

Last week we brought you the story of Shanti, the new snow leopard kitten at the Binder Park Zoo. This week the Binder Park Zoo tells us that Shanti has some new friends: two playful puppies named Lillie and Bhadra. These playpals are helping Shanti socialize in the absence of other kittens. So far the three have been getting along great!