Some of the world’s smallest monkeys born at Chester Zoo

Some of the world’s smallest species of monkey has been born at Chester Zoo.

The pair of eastern pygmy marmosets, one of the most miniature primate species on Earth, arrived to parents Zoe (3) and Baldrick (4). 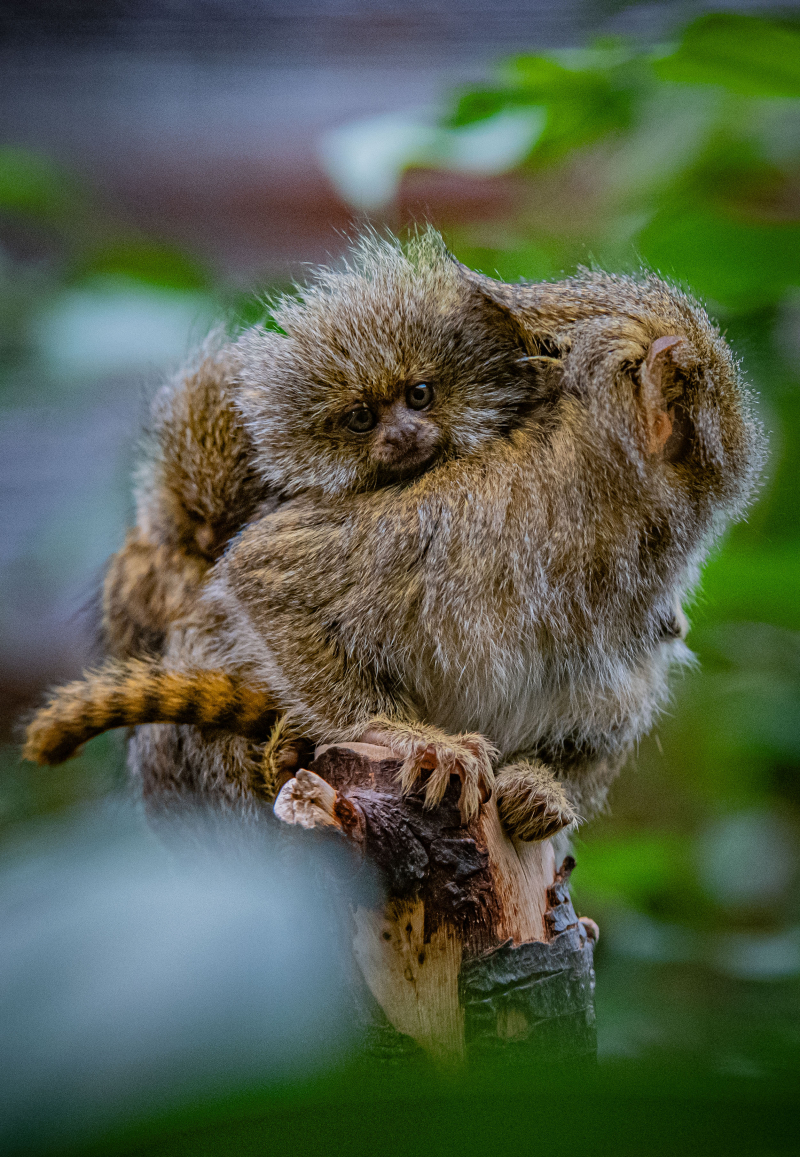 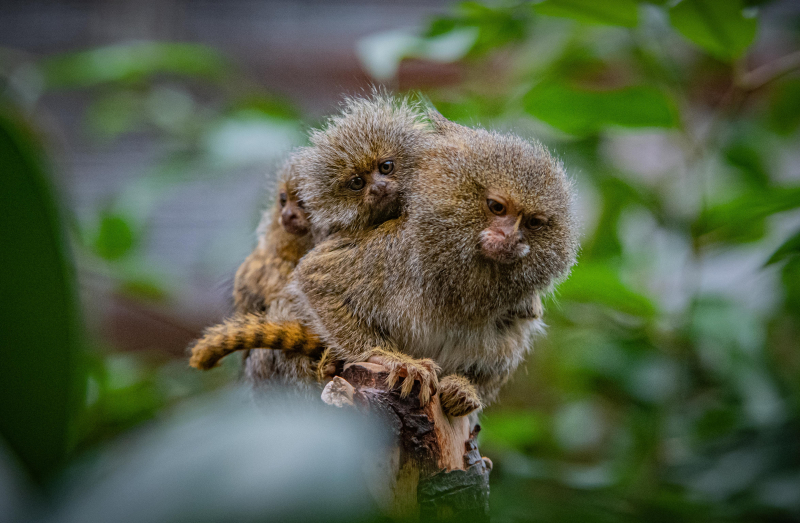 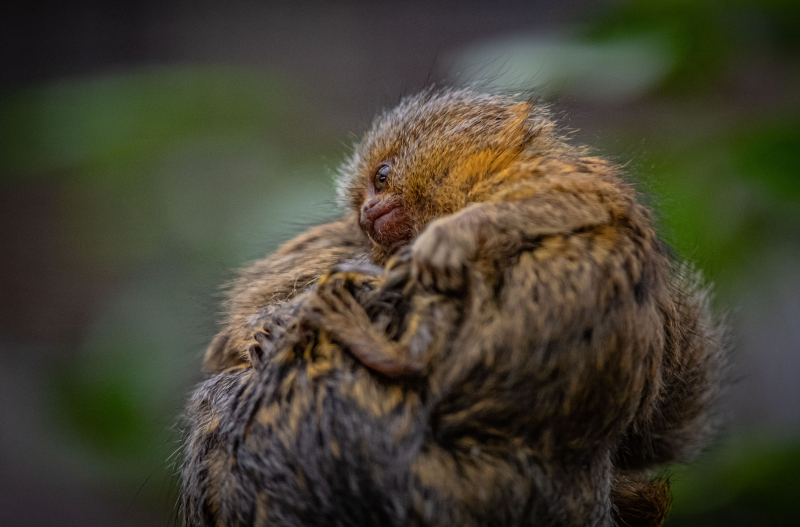 The tiny twins each measure just two inches (five centimetres) in length and weigh no more than 10 grams.

Keepers say the babies are already “highly inquisitive” but are so small that it will be some time yet until their genders are known.

“It’s wonderful to see new additions within the marmoset family and it’s almost unbelievable just how small the babies are when they are first born. They are no bigger than a ping pong ball!

“Mum Zoe and dad Baldrick have jumped straight into parenthood. Zoe is ever so caring and, unlike other primates, dad is heavily involved in the upbringing of the youngsters. Baldrick sensed that Zoe was ready to give birth and even put on a little extra weight to give him the energy to care for the twins. He’s really got stuck into the parenting - we spotted him carrying the babies around on his back when they were just one day old.

“New babies always strengthen family bonds and some of the younger primates in the group have also been carrying the new arrivals around. It’s great to see them learn and pick up parenting tips from Zoe and Baldrick, and that experience will be important if they one day go on to have young of their own. The fact that younger members of the family are trusted to carry around such delicate new-borns, builds a lot of trust within the group.

“The babies are already very inquisitive and aware of their surroundings. I can’t wait to see them develop their own little personalities.”

The eastern pygmy marmoset is native to the rainforests of western Brazil, south-eastern Colombia, eastern Ecuador and eastern Peru. These miniature monkeys are threatened by habitat loss and often exposed to hunting or their capture for the pet trade.

“Many primate species around the world are highly threatened, often due to large-scale habitat destruction, hunting and the illegal wildlife trade. Sadly, this is very much the case for the eastern pygmy marmoset.

“Despite their tiny stature, pygmy marmosets make a lot of loud noises, especially when calling out to attract a mate or warning others of danger. Even though they are the world’s most miniature species of monkey, their whistles and squeals can be heard throughout the rainforest. Unfortunately, as their forest homes continue to disappear, this can be to their detriment, as a lack of cover leaves them even more exposed to illegal hunters and trappers. Thankfully, conservation teams are working hard to restore forest and create safe areas while new arrivals at the zoo help us to further highlight what needs to be done to prevent their extinction.”

Pygmy marmosets are social animals, have one mate for life and their tails are longer than their bodies, which helps keep them balanced as they pass from branch to branch through the forest. They grow to around eight inches long and just 130g.

The word marmoset originates from the French word “marmouset” which means shrimp and their gestation period is around four-and-a-half months. The species has specialised diet which includes insects, fruit and tree sap.

Omaha’s Henry Doorly Zoo and Aquarium is celebrating the successful rehabilitation of two snow leopard cubs from Miller Park Zoo in Bloomington, Illinois. The one male and one female cub were born on August 4, 2020, and sent to Omaha about two months ago to receive treatment for “swimmer’s syndrome,” a congenital condition in which the cub is unable to tuck his legs beneath the body to walk normally. The cubs received physical therapy three times a day, seven days a week, and now can walk and run normally.

A Species “Saved” from Extinction Is Born in BIOPARC Valencia

The third Mhorr gazelle that is born this year in the Valencian park is a great joy for the conservationist world that has literally prevented the tragic disappearance of this beautiful African antelope that is still in "critical danger" on the IUCN Red List.

BIOPARC Valencia is a true reserve of life and also of life in danger of extinction . Its active participation in more than 40 endangered species preservation programs (EEP) have, in just a few years, made it a reference center for various species and their genetic reserve. And a paradigmatic one is, without a doubt, the Mhorr gazelle ( Nanger dama mhorr ) also called Dama gazelle that became extinct in its habitat and has survived thanks to the intense efforts of conservationists and parks such as BIOPARC.

In 2014 the first females arrived at the park from Rotterdam (Holland) and in 2015 a male from Madrid to create a breeding group at BIOPARC Valencia within the International Conservation Program of this species classified as "critically endangered" by the Red List of the International Union for Conservation of Nature (IUCN). Numerous specimens have been born within this herd and many of them have been transferred to other parks to continue the very important challenge of definitively saving the emblematic Mhorr gazelle from extinction. This beautiful female is the third birth of this unusual year in which, in the middle of a period of confinement when the park was closed to the public, the first was born. That calf was a breath of hope for the BIOPARC team and for many people who value the importance of protecting each species to conserve the planet's biodiversity . And with this sentiment, by popular vote, that first calf was named Hope.

We can see the group in a multispecies enclosure in the savannah living with other antelopes, the addax ( Addax nasomaculatus ). Slender and with a bright coat of an intense reddish color, their white markings stand out on the face, throat and lower part of the body. Indiscriminate hunting killed them in their habitat and only the effort and vision of the future of Professor José Antonio Valverde prevented their extinction. The group of 11 gazelles that he transferred to Spain for their protection are the germ of a recovery that continues today. There is currently a population of more than 300 specimens living in various European, North American and South African zoological institutions . And the ambitious reintroduction plan continues in different projects in North Africa. This beautiful gazelle is an example of the necessary involvement of the conservation world in all areas. The cooperation for its conservation in situ and ex situ and the very important awareness of the population to motivate a change of attitude towards the protection of nature. 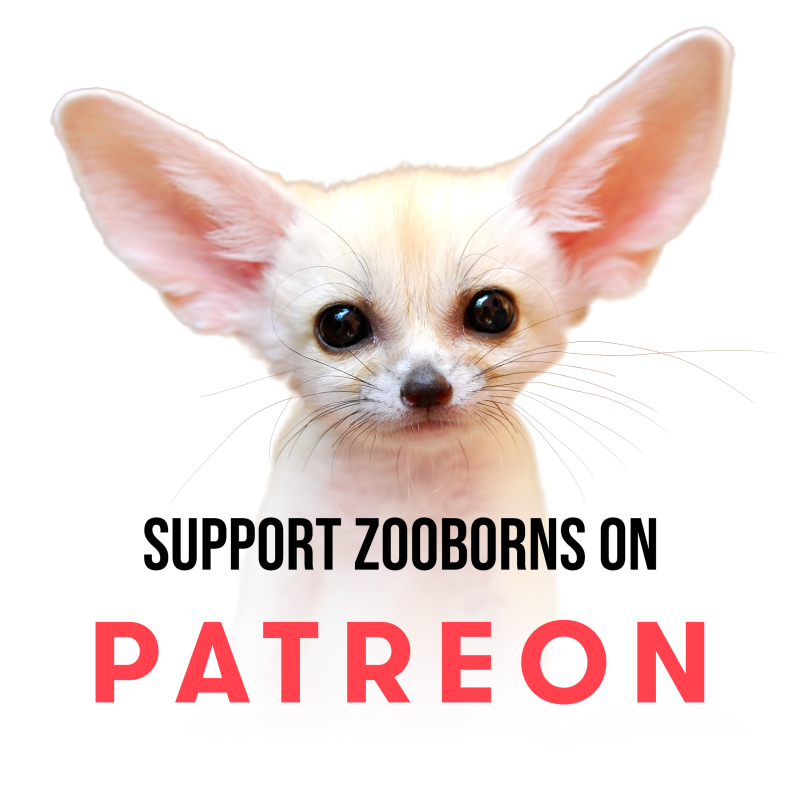 You’ve raised over 8K in donations to accredited institutions! Help us keep on spreading the news by becoming a ZooBorns patron today! Click here to start earning exclusive benefits: patreon.com/zooborns

The first days of life are often critical for large predators, which is why Burgers' Zoo initially provided the animals with as much peace, quiet and space as possible to ensure minimal disturbance.

Arnhem's pride has one adult male and two adult females. One of the lionesses gave birth to twins on 27 July 2020: a male and a female. With the birth of the triplets on 26 November 2020, there will soon be five lion cubs on display at Burgers' Zoo. However, the three newcomers will spend the next few weeks behind the scenes in a separate enclosure with their mother.

Even an iconic predator such as the lion, with few natural enemies other than humans, is becoming less and less common on the African savannahs. Loss of habitat, illegal hunting for trophies or traditional medicine, and human-animal conflict are taking their toll: the number of lions in the wild is drastically decreasing.